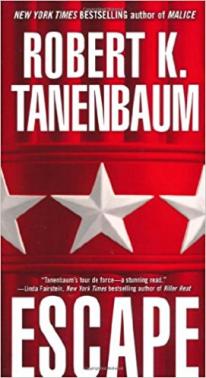 “Escape is yet another riveting crime story and courtroom drama by the inimitable Robert K. Tanenbaum. The former top Homicide Prosecutor in the Manhattan District Attorney Office shines a penetrating light on one of the most controversial topics in our justice system – the insanity defense. The result is a fast paced, provocative legal thriller that Tanenbaum almost has a copyright on.” — Vincent Bugliosi, former Los Angeles District Attorney and bestselling author of Helter Skelter.“

Claiming God commanded her to gruesomely murder her three small children, a radical political science professor with a high-profile politician husband pleads insanity, leaving New York District Attorney Roger "Butch" Karp the arduous -- and incredibly unpopular -- task of proving that she's not. Meanwhile, an American-born jihadist detonates a suicide bomb inside a Manhattan synagogue. A harrowing question links the violent crimes -- is there any defense for a killer who believes committing murder is God's will? As Karp, his wife Marlene, their daughter Lucy, and a cast of eccentric accomplices begin a deadly manhunt, they uncover an intricate terrorist plot to paralyze New York's emergency response system and cripple the economy. They must find an assassin known only as "The Sheik" before he orchestrates a bloody massacre that could devastate the country forever....